Mangadu is a small town situated 24 Kilometers away from Madras in between Kundrathur and Poonamallee.

Goddess Parvati mistakenly closed Lord Siva’s eyes, as a result, the entire universe fell into darkness. Goddess Parvati pleaded Lord Siva for her ignorance. As instructed by Lord Siva, Goddes Parvati performed strict penance at Mangadu (Mango trees or forest). She held Japamala and stood on her left leg and folding right leg in the mid of “Panchagni” and performed Strict for Lord Siva. 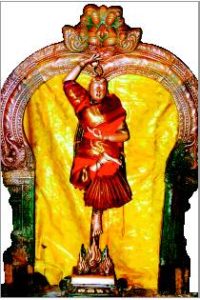 Impressed Lord Siva appeared before the Godded and asked her to come to Kanchipuram for marriage. Goddess moved without turning off the holy fire. Sri Adi Sankaracharya installed SriArdhameru Chakram to reduce the heat in this region. The heat came down and restored the natural living in this region. Sri Chakra in the form of Ardha Meru using eight herbs.

Our Maha Periyavaa who knew about this visited, Shifted the  THapas Kamakshi to the left side of the temple and in the sanctum sanctorum, he consecrated a very peaceful form of the Goddess holding a parrot and sugarcane which was made of Panchaloha. She is called the “Adhi Kamaksjhi”  and Thapas Kamakshi sanctum is on the left side.

Worshipper can choose any one day in a week for worship. They have to repeat the worship on the same day next week for seven times (one Mandalam). Every time two fresh lemon fruits are to be offered and they have to get back one lemon and the same has to be kept in the pooja. When they come next week, they have to bring the old, which was kept in pooja, with two other fresh lemons.

E-Donation & E-Pooja :
Donations To Thirupani Works And Also For Pooja Fees Can be Sent Either by Banker’s Cheque Drawn in Favour of

Sri Velleswarar Temple
This is a very ancient temple situated near to Sri Kamakshiamman Temple. Lord Muruga with Valli and Theyvayanai are sculptured in a single stone and Sri Vinayaga with mango are the landmarks on this temple.

A little away from Mangadu is the temple of Lord Velleeswarar. Velli is the name of planet Venus-Shukra. As in the Kanjanur Shukrapureeswarar temple, this temple is of Shukra importance. Mother Kamakshi is the important deity in Mangadu and Kancheepuram. Similarly, Velleeswarar is the main deity in this temple. Only the feet of Mother are installed here.Lord Ganapathi is holding paddy stalks and mango in His hands. These are offered as nivedhana to Lord Vinayaka in the faith that farm yields would be in plenty. Another Vinayaka in the Goshta appears with an umbrella and a mango.

The six week worship of the goddess

In the first week the devotee goes to the temple with two lime fruits, coconut, thamboola, banana as well as camphor and gives to the priest. After Pooja the priest returns after Worship one lime fruit to the devotee along wioth Prasada. Then the devotee should worship the lime fruit given to him/her for a week. He should sing the the song of the first week (Given below.It is believed that the Goddess herself composed these songs) during that week. After a week , the devotee should go to the temple with three lime fruits. Two lime fruit are returned which he/she should worship singing the second weeks song. After six weeks apart from coconut, banana and other pooja materials , the devotee should take along with him/her a flower garland , boiled milk and sugar candy(Kalkandu) , Pure edible camphor(Pachai karpooram) and honey.. At that time the priest would not give back any lime fruit. The milk given back should be distributed to the devotees inside the temple then itself.It is believed that whatever the devotee desires would be fulfilled.
Devotees believe that going on the same day every week but due to circumstances it may not be possible , So going one day weekly should be aimed at.
Male devotees who want to get a job or promotion should are advised to go on every Tuesdays. Girls who want to get married are advised are advised to go either on Tuesdays/Fridays /Sundays.. They are also advised to tie an yellow thread in the designated place outside the temple.Ladies wanting to have children are advised to go on Fridays .They are also advised to tie a baby cradle or a cloth with a stone inside it on the tree outside the temple
I am giving below the six week songs and their meaning. Though Ragas are prescribed, they can also be chanted in a folk style.

The six week songs to worship Kamakshi of Mangadu-Set I

I am orphan, support me mother,
The goddess of all universe,
You are the primeval divine power.

You are shining in Kanchi as the Karpagam who removes all worries,
For providing comforts always , you are there in Benares,
For giving comforts of life to humans you are sitting in Madhurai,
And for solving the wants of our mind you were born in Mangadu.

Mother I would worship you for six weeks continuously,
Please shower the rain of mercy and occupy my mind,
You know my problem, , You know my sorrow,
Please make your feet stand in my mind forever.

I have mother , father , relations and affection,
But if your grace is not there , what is the use of some one being there,
Consider me as your baby , I salute your feet,
And hug me like a mother does her baby,
And protect me in your tight embrace.

Please give me a bon to sing the songs nicely with proper Swaras,
Oh Goddess who is worshipped by Jagad Guru of Kanchi.

She who drank milk hiding her form,
In the mango garden of Mangadu

Oh Goddess who did penance , Oh Goddess who ruled the earth,
This is the second week , destroy all my problems,
Like the fruit of lime , change my mind,
Oh Mother Kamakshi , remove the unbearable sorrow.

Oh God with the auspicious form who removes the want of people,
Oh Goddess who removes sorrows and who lives in town of Mangadu,
I have come here with a melted mind so that I would get auspiciousness,
In the path of Sankara and mother I have surrendered to you.

Oh Kamakshi , just with a play, you have occupied half of the body of Shiva,
And how can there be a good life without your mercy.

Oh first gem who knew past , present and future,
This is my third week, give me boons,
Oh Lady who sits along with four parts of army,
Oh very valuable new gem.

The crores of devotees have come seeking your place,
And you are the Goddess of the Kali age ,
Who gives happy life to all those who come here.

Oh Goddess who is praised by the four good Vedas,
This is the fourth week , please do lot of good things,
You who wore the form of Lord Shiva on the sand,
And entered married life, You who gives happiness.

Sir, there is no need to fear , for those who pray this mother Kamaksi,
For there is nothing impossible for them,
We Should beg her sir, for,
She is the goddess who gives unasked boons.

For people with a good heart she gives happiness through out the day,
For the hard hearted ones, she would wait to show her grace,
And even for those who have something in their heart but speak some thing else,
The mother of Mangadu has a merciful heart.

With a parrot in one hand and sugarcane in the other,
She is auspicious looking and has the “Sree Chakra” with her,
She would remove all the doubts in this fifth week and she is,
The Goddess who rules and is personification of joy.

You were prayed by Adhi Shankara ,
You are in the town of Mangadu,
And you did penance in fire,
To get married to Lord Shiva.

In this sixth week , I have brought fruit and milk,
Please tell that my desires would be fulfilled, for this is the time.
With affection I would give it to several people,
The milk that I offered you with love.

Protect me Kamakshi of Kanchi,
Meenakshi of Madurai and Visalakshi of Benares
I surrender, surrender Annapoorni , Shankari,
Mother Ganges and Goddess of universe.

Thiruvilakku Song (to be sung on sixth week)

We lit the ceremonial lamp ,
Please protect us in this world,
We would bear all problems that we get,
For you are our support in this world.

Are wealth and happiness permanent,
Does this human life last for ever,
If we salute you with a clean heart,
It is true that we would get great results.

If daily we continue worshipping you ,
In this life newer and newer tastes will flow,
Oh Leader whom the people worship,
Oh Kamakshi who lives in this divine Mangadu.